In 2005, stakeholders formed the Lake Elsinore & Canyon Lake TMDL Task Force (Task Force). This Task Force, administered by LESJWA provides stakeholders an opportunity to coordinate and share the cost of all implementation efforts. The Task Force is comprised of all the dischargers identified in the TDML, including: Municipal Separate Storm Sewer System (MS4) permittees, wastewater treatment plants, agricultural operators, concentrated animal feeding operations (dairies), and a number of other state, federal, or tribal agencies that own land or operate facilities that discharge in the watershed. 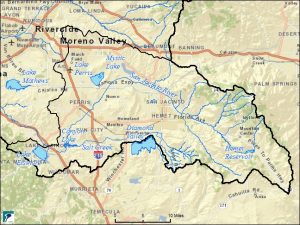 Lake Elsinore first appeared on California’s 303(d) list of impaired waterbodies in 1994. Canyon Lake was added to that list in 1998. The lakes were deemed to be impaired by low dissolved oxygen (DO) levels and excess algae growth. Elevated nutrient concentrations (e.g., phosphorus and nitrogen) were cited as the primary cause of poor water quality in both lakes.

The Santa Ana Regional Water Quality Control Board adopted a Total Maximum Daily Load (TMDL) for nutrient discharges to Canyon Lake and Lake Elsinore in 2004. The TMDL became effective when the United States Environmental Protection Agency (EPA) gave it final approval on September 30, 2005. The scientific data and analysis used to justify the TMDL is summarized in a detailed technical support document prepared by the Regional Board staff.

The TMDL specified numeric targets for DO, Chlorophyll a, Ammonia, Total Phosphorus (TP) and Total Nitrogen (TN) concentrations in both lakes. It also established Load Allocations (LA) and Waste Load Allocations (WLA) to govern the discharge of excess nutrients from non-point sources and point sources, respectively.

The TMDL includes a detailed Implementation Plan which describes a variety of activities that must be undertaken to meet water quality standards in Canyon Lake and Lake Elsinore. In the decade following EPA’s approval, stakeholders throughout the watershed initiated a large number of programs and projects to comply with the requirements set forth in the TMDL Implementation Plan.

Copies of Santa Ana Regional Water Quality Control Board Resolution No. R8-2004-0037 and TMDL Technical Document prepared by Board staff , as well as, deliverables submitted to the Board by Task Force stakeholders are available on the Regional Board Lake Elsinore and Canyon Lake webpage. 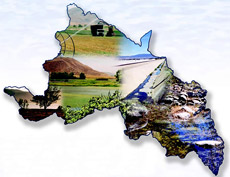 Since December of 2004, SAWPA/LESJWA staff has been working closely with Stakeholders and Regional Board staff to address the requirements of the Basin Plan Amendment to implement the Lake Elsinore and Canyon Lake nutrient TMDLs. 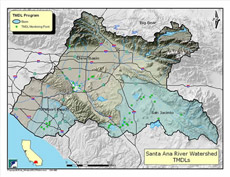 Lake Elsinore and Canyon Lake are located in the southwestern portion of the 780 square-mile San Jacinto watershed approximately 60 miles southeast of Los Angeles. Most of the San Jacinto River watershed falls within Riverside County; however, a small western section is located in Orange County.

In rare situations, including torrential rains and extended rain periods, the lake overflows into Temescal Creek, and ultimately to the Santa Ana River. 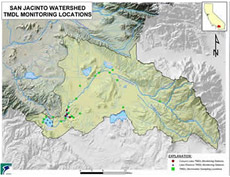 Since 2000, stakeholders, in cooperation with the Regional Board, have been working to identify the source of nutrients impairing each lake, and evaluate the impacts to water quality and beneficial uses incurred from nutrient sources.

The Santa Ana Water Board approved the program’s monitoring plan in March 2006. This initial monitoring approach continued through July 2010, where following a review of available data that indicated consistent and similar nutrient concentrations and physical water quality parameters the monitoring program was reduced.

Monitoring continued under the revised program through June 2012. At that time, in agreement with Regional Board, while watershed monitoring would continue, in‐lake monitoring would be discontinued temporarily to redirect TMDL program funding towards nutrient reduction actions including lake stabilization, fishery management and alum application in Canyon Lake.

Final Draft to Regional Board: Technical Report for the Revision to the LE/CL TMDLs_120318 (click here for link to Final Draft 21/01/2018 TMDL Technical document)